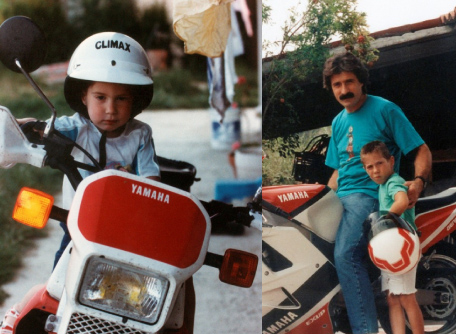 "I was born in Cattolicaon 20th January 1987 and I used to live in Coriano (Rimini). My parents had ice cream-shop and my father was a great passionate of motorbikes and motor-races. I spent my childhood between ice creams and motors. When I was 4 years old, my parents offered me my first pocket bike as a Christmas present, it was a Suzuki 50 minicross, then I started to step on the gas in the fields around my house. My first laps with the pocket bikes were when I was 7. 2 years laterI competed in my first official regional race.

I went on riding “Pasini” minibikes (constructed by Mattia Pasini’s dad) until I was 13. During this period I won the national championship twice: in 1999 and in 2000.

In 2000, I tried a 125cc Gran Prix bike for the first time and the following year I competed in Honda trophy 125GP and the125GP championship with Massimo Matteoni’s team by riding a Honda. During the first part of the season, I crashed a lot but in the second part I obtained very good results. I finished in 9th position, both in the Honda trophy and in the Italian championship. 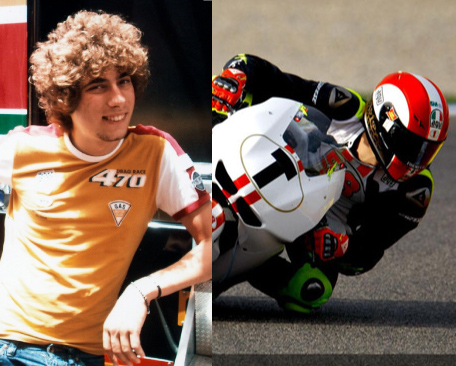 In 2002, when I was 15, I took part in the European 125 Championship, again with Matteoni but I drove an Aprilia. I won the championship and in the meantime I competed in the last 5 races of the World Championship, replacing the rider Jaroslav Hules.

In 2003, I took part in the whole World Championship, still working with Matteoni and Aprilia 125. I finished 21st and my best result was a 4th place in the last Race.

In 2004 I changed to Fiorenzo Caponera’s team and it was during this season that I got both my first pole position and my first victory. We were in Jerez, and it was raining a lot. I could for the first time, hear the Italian hymn which was playing for me. After ups and downs I unfortunately lost my last 2 races because of an accident and I finished 11th in the general list.
The year 2005 was my last in 125cc and it was also the best: I won one race, I had 6 podiums and at I finished 5th and my best result was a 4 th place in the last Race. at the final classification of the championship. 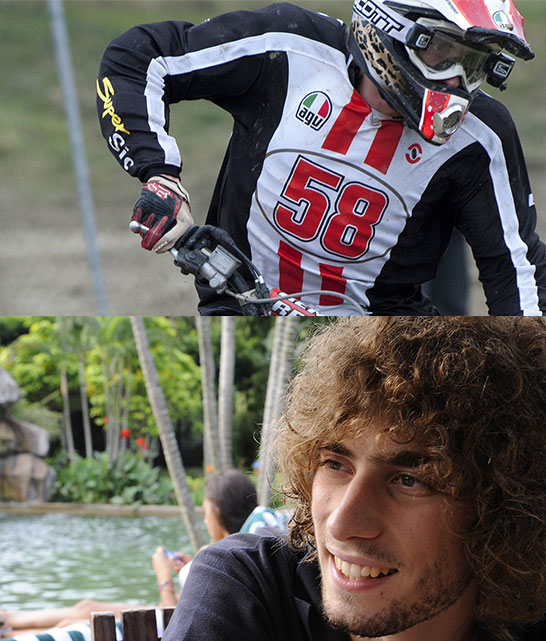 I passed to the 250cc in 2006, with the Team Metis Gilera and had an official bike. It was definitively a hard season, with many misunderstandings both with the technical manager and with the team. It was for this reason that in 2007 the Gilera took me the bike and gave me a LE bike (a bike from the previous season) instead of the official one. I had no better results but it was a more positive year: first of all, I started to work with Aligi Deganello and some of the guys that are still working with me now, after 5 years, and with whom I really succeeded in establishing a great relation; moreover it finally came the time for us to understand our great potential.

In 2008 Gilera gave me again an LE (this time somewhat more updated), instead of the RSA official bike. I had a shitty start of the season, with two zeros in the first two races, but in thePortugal GP I got my first pole-position and my first podium, while in Mugello GP (my home GP) I obtained my first win in the 250cc. Halfway through the season I was leading the championship, the Gilera finally gave me the official RSA bike, and it began to take a better way to me: I got 7 Poles, 6 victories, 12 podiums and the World Championship in advance of one race. The following year I decided to stay in 250 cc, trying to win the second World Title, there were good basis, but I crashed with the cross bike one week before starting the championship and I broke my scaphoid. Beyond missing the first GP, it always happened something during this season that couldn’t allow me to finish races. Despite of all that mishaps, I could race for the last GP and fight for the title…Valencia. I had to win the race to gain the title and Aoyama should have finished in 13th it would have been a miracle, but the game was still open... the result was that he finished 7th and I crashed while I was leading the race. To cut a long story short... I finished even third in the final list, despite of 6 wins and 10 podiums. 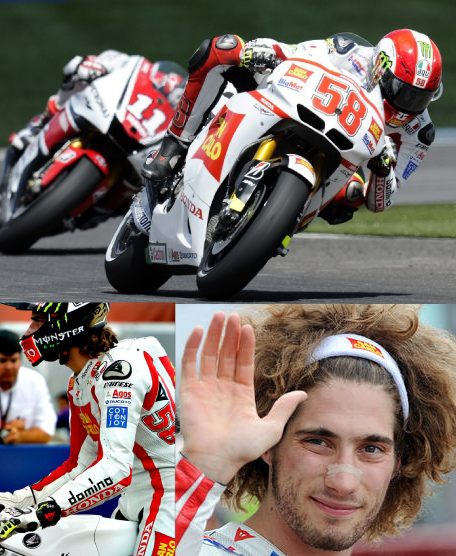 Ah... I forgot... In 2009 I also took part in Imola Superbike race, replacing Nakano, riding the Aprilia superbike, it was a great day: I crashed in the first round but I finished third in the second one. I still remember all the people on the hills supporting me so heartily... it was sogreat !!!!!!! In 2010, I did the great "jump" to the MotoGp class, after so many years with Piaggio, I passed to Honda, with Fausto Gresini’s team It was a very hard season, because MotoGP’s level is so high, moreover, at the beginning, me and my team (the same I had in 250) were not experienced and this complicated furthermore the situation. Despite all, we always hang together and gave our best. In the second part of the season we improved so much and at the end we were near the top riders. I finished in 8th position and my best result was a 4th position (I lost the 3rd at the finish line!!). "

This is until 2010. He was still writing the year 2011, he was still with Gresini’s Team, with the same team made by friends-technicians, but with the same official treatment as the official HRC Team. It was an year of improvement, more and more hard battles with the top rider... he finished 6th in the general list, with some satisfactions.. 2 poles positions and two podiums in the queen class: the 3rd place in Brno and the second place in Phillip Island, his best result in the MotoGP class... so close to win.

His fights are now ours: from the highest step of the podium he spurs us to never give up and to do our best for this solidarity project. In this Race of Love…